In the 18th Century, a Marwari Jeweller built Mandawa Haveli for his family. The current owner Mr. Dinesh Dhabhai and his family purchased it in 1984.

Between 1984 and 1990 they operated a small handicraft shop within the Haveli. Many of the tourists that came through suggested converting it into a Hotel. Mr. Dinesh decided to do so and after a further nine years of renovation and repair, employing local craftsmen from Shekhawati, he opened with just one room.

On 14th January 1999, the first tourist stayed in Hotel Mandawa Haveli. The gentleman, from Germany, booked for one night but stayed four! This gave Mr. Dinesh Dhabhai the confidence that the hotel would be a success. Today there are twenty rooms.

Hotel Mandawa Haveli has been featured in many books, magazines and publications including: 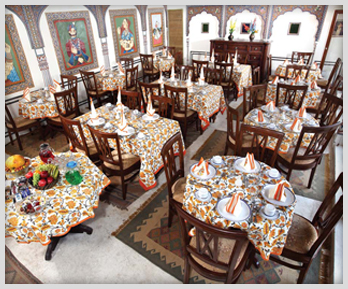 Located overlooking the garden, just to the right of the steps to reception. The restaurant, which is fully air-conditioned, is where the breakfast and lunch buffets are served.

This tranquil garden area located just on the left hand side as you enter Hotel Mandawa Haveli is the perfect place to take a break, have a light snack or enjoy reading a magazine with either a cup of coffee or a pot of tea. 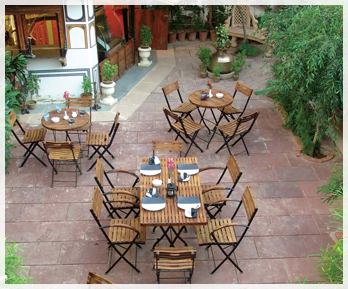 The rooftop is a fantastic place to catch either sunrise or sunset and is an ideal setting for a pre-dinner drink. This is also where the magical candle lit dinner buffets are served. In season (October to March or as requested) local musicians will play traditional music and perform local dances.

NB: If weather is unsuitable, dinner will be in Rasoi Restaurant.